ADD TO CART or Buy it Now
Buy Wholesale
Overview What's in the box? Ratings & Reviews

One of The Most Powerful Stun Guns

If you're looking for a powerful stun gun for women or men this Taser is ready to shock any attacker. When you use this Taser on an attacker, the attacker loses control of his muscles in addition to a frightening mental destruction. The attacker may vomit, defecates or urinates when attacked in most cases. The stun gun effect of a quarter (¼) second contact can cause severe pain.

This mermaid will surely hunt down any attacker for the attention it brings to the scene. It is a sure sign of retreat for any attacker unlucky enough to cross its path.

You do not have to pay hard earned money every two months to buy new batteries because this Terminator stun gun is equipped with built-in long-lasting batteries that need to be recharged every six months.

When the flashlight shines into the eyes of an attacker, it can temporarily create a blinding effect, which enables you to immobilize the attacker with stun gun Terminator.

The stun gun provides perfect grip because of its finger indentions on the body.

The Terminator® Stun Gun comes with a lifetime replacement warranty. 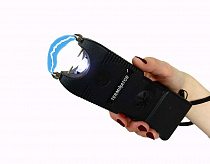 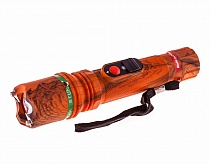 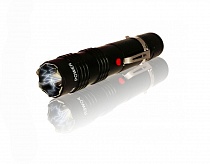